Portland Rising invites you to a Night-in At The Movies

Please join us for a showing of the movie Finally Got The News: The League of Revolutionary Black Workers and a following discussion of the League’s work and differences in political possibilities then and now.

“A classic! Rather than the lock-stepped, black-bereted, leather-jacketed Panther units of other films, FINALLY shows rather ordinary people becoming very angry with the system. Ideological in the best sense: it is a film about ideas [and] presents a serious strategy for mass working class action… It speaks of a specific time and specific experiences in terms that will remain relevant as long as working people are not able to control their own lives.” —Dan Georgakas, Cineaste

To join us for some serious movie-night fun request a movie night zoom link by emailing: portlandrisingprograms@gmail.com.

—  Why Unions Matter campaign and Why Unions Matter on-line library (which has short, thoughtful articles that illustrate why unions matter to working people, discuss and evaluate past and present organizing strategies, and highlight current threats to unions.)

—  Labor Movies Library  Portland Rising maintains a library of labor movies which are online and can be watched for free.

— Working: A Photo Series  Portland Rising is collecting working people’s photos of their work. Everyone who works has a workplace and work “tools.” Your own workplace is a familiar site, but often hidden to anyone but your coworkers or yourself.  We want to turn what might be a solitary experience – what it’s like at your workplace – into a collective one.  Photos will be curated and those chosen for viewing will be posted on the Portland Jobs with Justice’s website. Please submit your photos!

—  Public programs (which aim to encourage collective reflection and strategic thinking); past events include:

Portland Rising began as a project of Jobs with Justice and made its debut on April 16th, 2011 with a huge rally joining a variety of union and community campaigns under the broad theme of Good Jobs, No Cuts.  In the following months, Jobs with Justice, unions, community groups, and activists continued to pull campaigns together in a number of large and energetic Portland Rising actions, including two bus tours.  We built a new level of solidarity from planning campaigns and actions together under the banner of Good Jobs, No Cuts. 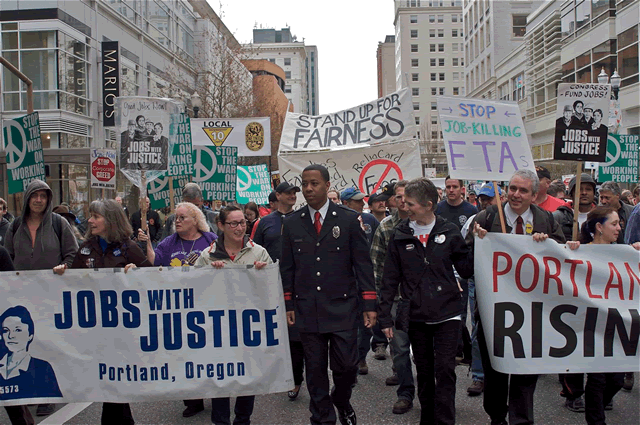 In September 2012, we brought labor and community leaders together for a frank conversation about the trends that systematically affect all of us: the decline in real wages, unacceptably high unemployment, a growing precariousness in work relations, the privatization of and cuts to services, and the globalization of production.  We agreed that corporations have benefited from these trends and that our political leaders have generally promoted policies that have encouraged them.

We also agreed that conditions will continue to worsen for growing numbers of Americans unless we were able to articulate and build support for a positive vision of change.  That conversation produced consensus around a starting point that included the following interrelated demands: good jobs for all, a strong and accountable public sector serving human needs, and healthy cities and communities.

To advance these demands, Portland Rising formed as an ongoing committee of Jobs with Justice with the aim of joining with representatives and activists from unions, community groups, and others, in a process of strategic campaign planning, action, reflection, and education. More specifically, we seek to engage with as well as promote campaigns that:

If you would like to get involved with the JwJ Portland Rising Committee please contact us by submitting the form below.